It is 20 years since Ginnie and I took on the ownership of Avington Trout Fishery from Barbara, Sam’s widow, and her son, Howard Holland. And there has hardly been a single day when I have not heard myself thanking someone up there for allowing us to have temporary ownership of this most beautiful Fishery.

We have invested in the Fishery with the building of the lodge, the improvement of the walls of the stock ponds, the all-weather paths, facilities for gentlemen and lady anglers etc. etc., not to mention more and better quality fish, and investment is still on-going.

Today, we have the privilege of having Aaron Hopkins as the leader of the gang, Roger Greentree as the “face” of Avington, and James Wintrip, with his newly achieved degree in Aquaculture and Fishery Management from Sparsholt College (congratulations), as our assistant to Aaron and Roger.

I feel very secure in their intention to maintain and improve the Fishery, improve angler relationships, and to get Avington back to the place it belongs in comparison with other fisheries.

To turn the battleship of Avington around takes time, and in this case a year. The old brigade have moved over and the new have taken us back to yesteryear.

There is only one publication that compares fisheries, and that is the “100 Best Stillwaters” published each year in the Trout Fisherman. Once again we are back, listed at 14th place over all, out the 100 discussed, and to second place in the list of “Small” Stillwater Fisheries.

Thank you Aaron, Roger and James.

We have a lot to live up to, but many things we do not control. Water quality being one. Whilst we baked in super hot temperatures in England during July, at the very end of the month at the hottest day, Avington, which takes one third of the River Itchen, to keep it oxygenated and cool, water temperature reached 17 deg. The lakes fished well and many of the anglers bagged up and had wonderful angling experiences.

Flies that have been have been working well in the mornings, have been Damsels, PTN, FBHE (olives) in the heat (and it seems we have more to come, so take note). And in the afternoons, Buzzers, Okey Dokey, together with short line and sight casting.

Will, caught this beautiful Brown on the 3rd of July from lake three. It had been in so long that it had lost probably 3 or 4 ponds in weight since being stocked. 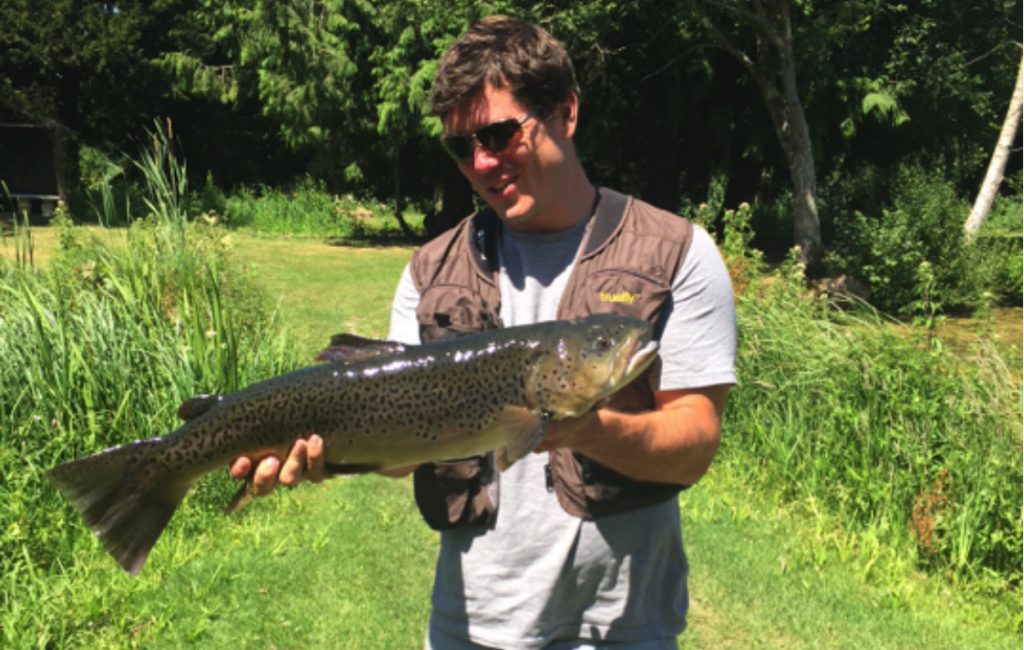 Talking of which, we have decided to run a competition on Face Book to rename the three lakes.

It was felt that Lake 1, 2 and 3, were inadequate descriptions, and so Roger has launched the re-naming competition, with a two fish ticket to be awarded to the originator of the name chosen for each lake. Roger to have the final decision.

Congratulations too to James Sampson (4th from the left) who won the fish off at Avington, and came 4th in the Trout Master’s fish off. He was praised by the Co-ordinator who complemented him on his fishing skills.

If you want to keep up to date with what’s going on at Avington, check our Facebook page, and our new updated Web site.

We are all looking forward to seeing you very soon.